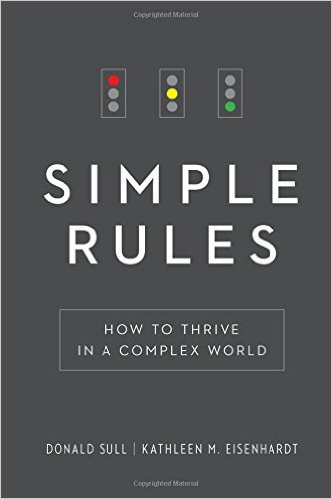 I just finished reading “Simple Rules” by Donald Sull. After reading the introduction, I had to continue. The book begins by describing how military surgeons in wartime situations make decisions on who to treat first, and who not to treat. It’s brutal; the decisions have immediate life and death consequences so they can’t second guess decisions. Right from that moment in the first chapter I realized if this technique was good enough for military surgeons and helped them – it was something I needed to learn.
Donald Sull starts his book with a story that gets you hooked, and continues telling stories to drive home points throughout the book. Every concept, idea and technique he puts forward is accompanied by a story or anecdote from his seemingly endless supply. The ideas are woven into his stories, and each one illustrates a point well. While I enjoyed this technique as a reader, one critique I have is that I found it difficult to pull out the core ideas as each concept was woven into a story at a different point. I’m someone who makes lists and takes notes, and it was hard to pull out good notes without breaking up the narrative.

So what are simple rules?

Here’s an example “Eat food. Not too much. Mostly plants.” – which distills the nutritional insights of Michael Pollan into a handful of words.

“Simple words consist of a handful of guidelines applied to a specific activity or decision, such as deciding what to eat.” – Donald Sull, pg 25

The concept is simple but takes a while to figure out how to apply to your specific situation. The book gives great examples, and makes it easy to feel like you can fit the technique to your situation. The thing I liked most is the idea of memorability and usability of the rules.

[Tweet “”To be used, rules have to be remembered, and limiting the number to a handful makes this possible.” – Donald Sull, Simple Rules”]

Where I work we spend a lot of time on User Experience for on-screen interfaces, and spend a lot of time thinking about how users add and edit content. Simple Rules as a technique for decisions feels like you’re considering the user experience of decision making and improving the experience through good tools and techniques. I really like being thoughtful about how we make decisions and giving my team clear guidelines about how to make good decisions quickly.

It’s worth a read to identify how you can simplify your decision making process either at work, to empower a team, or personally.

Check out the book on Amazon